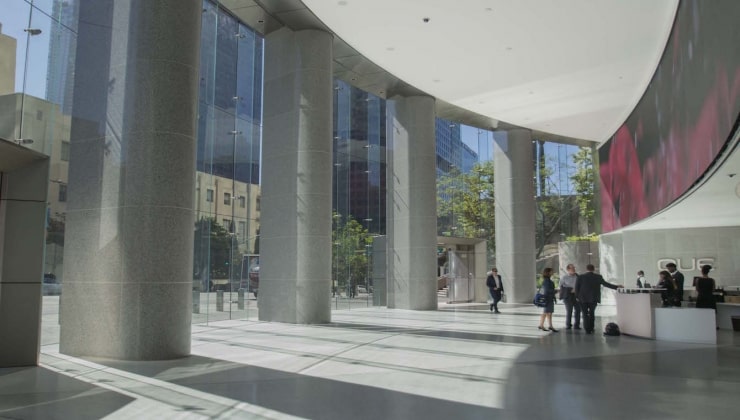 U.S. Bank Tower, a staple of the Los Angeles skyline standing at 1,018-feet is said to be one of the most recognizable buildings west of the Mississippi. When OUE Ltd purchased the iconic U.S. Bank Tower in 2013, the company had one thing in mind, to reinvigorate the building not only for corporate use, but tourism as well. Renovations of the tower were to include an observation deck with a 360° view of Los Angeles accompanied by a restaurant, a glass Skyslide extending from the 70th floor, and a full lobby renovation in hopes of enticing passersby to visit. The lobby however would not be your typical corporate common area. Gensler, the architectural firm in charge of the project, chose to install a 126 foot by 17 foot hi-resolution digital art wall, built to span the entire space and be visible from the street outside. 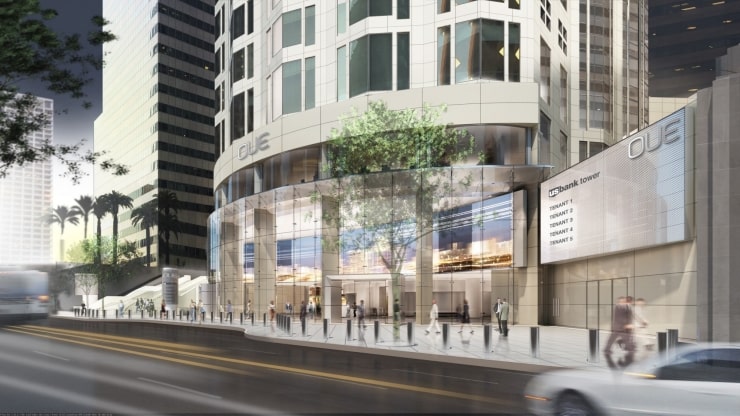 The hi-resolution digital art wall would not only be the only of its kind visually, it would also need to be audible. Audibility of the speaker system that accompanied the screen posed a significant problem within the space due to the plethora of hard spaces and constant building occupant traffic. The predominately hard-scape environment consisting of a terrazzo floor, back painted glass, stone walls, and curved façade glass created a highly reverberant space making occupant speech and sound system audio unrecognizable. Wayne Walker of Gensler stated that one of the main focuses of the firm within the space was to “create some soft surfaces in this predominately hard scape environment” and that the firm was primarily “looking for one major surface to be a sound attenuating feature.”

BASWA Phon sound absorbing plaster was used throughout the lobby in order to minimize reverberating frequencies and allow for speech intelligibility. The BASWA Phon System was fitted to be installed on the curved space, as well as in the areas encompassing the building’s audio system. By installing BASWA Phon in the areas surrounding the screen’s speaker system, audio traveling from the speakers was made intelligible to the occupants of the lobby, while also not becoming overbearing within the space. Special care was also taken to install BASWA Phon sound absorbing plaster in areas near the security desk to allow for speech intelligibility between staff members despite the noisy environment.