Thorne Auditorium at the Northwestern Pritzker School of Law 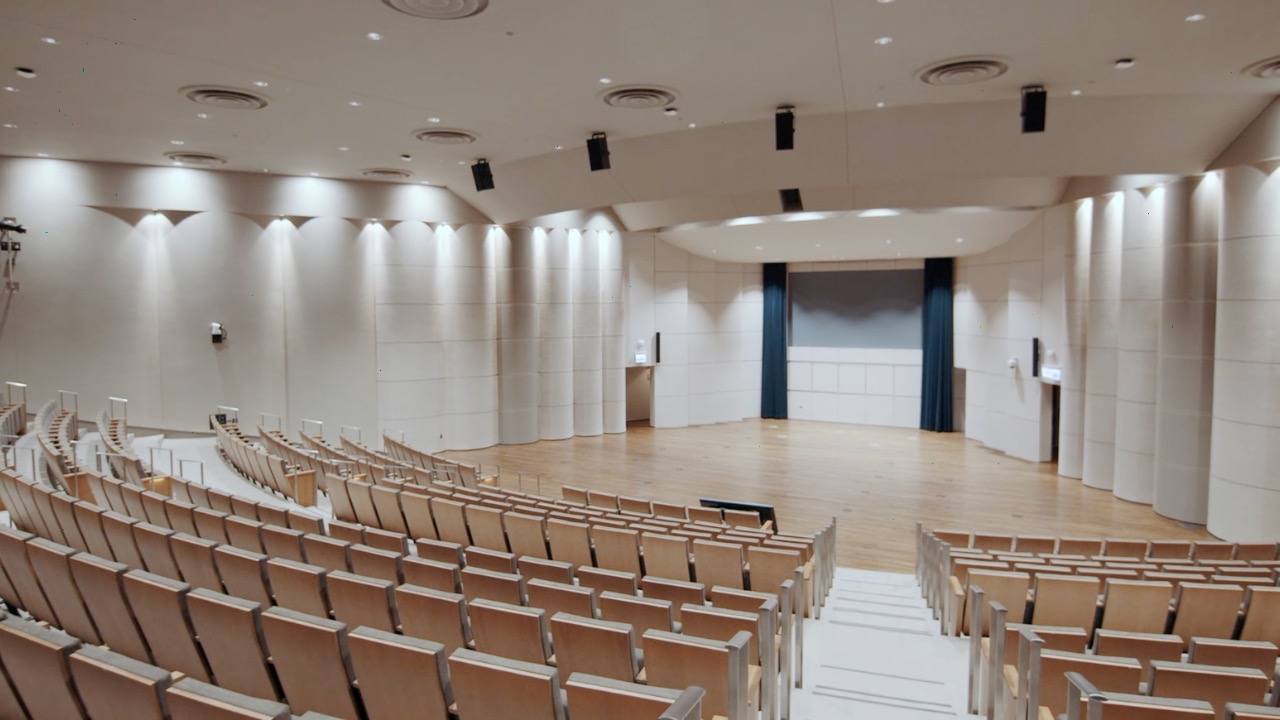 The Thorne Auditorium located at the Northwestern Pritzker School of Law in Chicago functions as more than just a lecture hall for aspiring law students, the auditorium also plays an important civic role in the community. Often the location of events hosting politicians, scholars, business leaders, and other notable figures, the Thorne Auditorium is a space thats primary function is to educate through programming.

To continue to provide programming that serves as a catalyst for important work being done in education and government, the Thorne Auditorium made the decision to renovate the space to significantly improve the way acoustics within the space functioned. In addition to making some architectural updates to the auditorium, of utmost importance were the integration of an amplified sound system while maximizing the natural capabilities of the space’s amphitheater design. To help create an ideal lecture hall setting, while incorporating unique design aspects, architect Holabird & Root hired acoustical consultant firm Threshold Acoustics. The Threshold Acoustics project team focused on introducing an audio system to the space while making significant improvements to speech intelligibility.

The project team faced the challenge of correcting flutter echoes created between the geometry of the room’s side walls design to improve speech intelligibility. Flutter echoes occur when sound bounces off of parallel reflective walls.

The shaping of the side walls was designed with a scalloped feature, there are cylindrical portions that protrude from the wall at varying diameters at points, and the reflection of these points created a flutter echo in the audience. Due to the fact that a point on each of these cylinders in parallel to the same cylinder on the opposite wall the sound incessantly reflected between the points creating a prominent echo. The team needed to mitigate this effect while also evenly distributing sound amongst the audience. 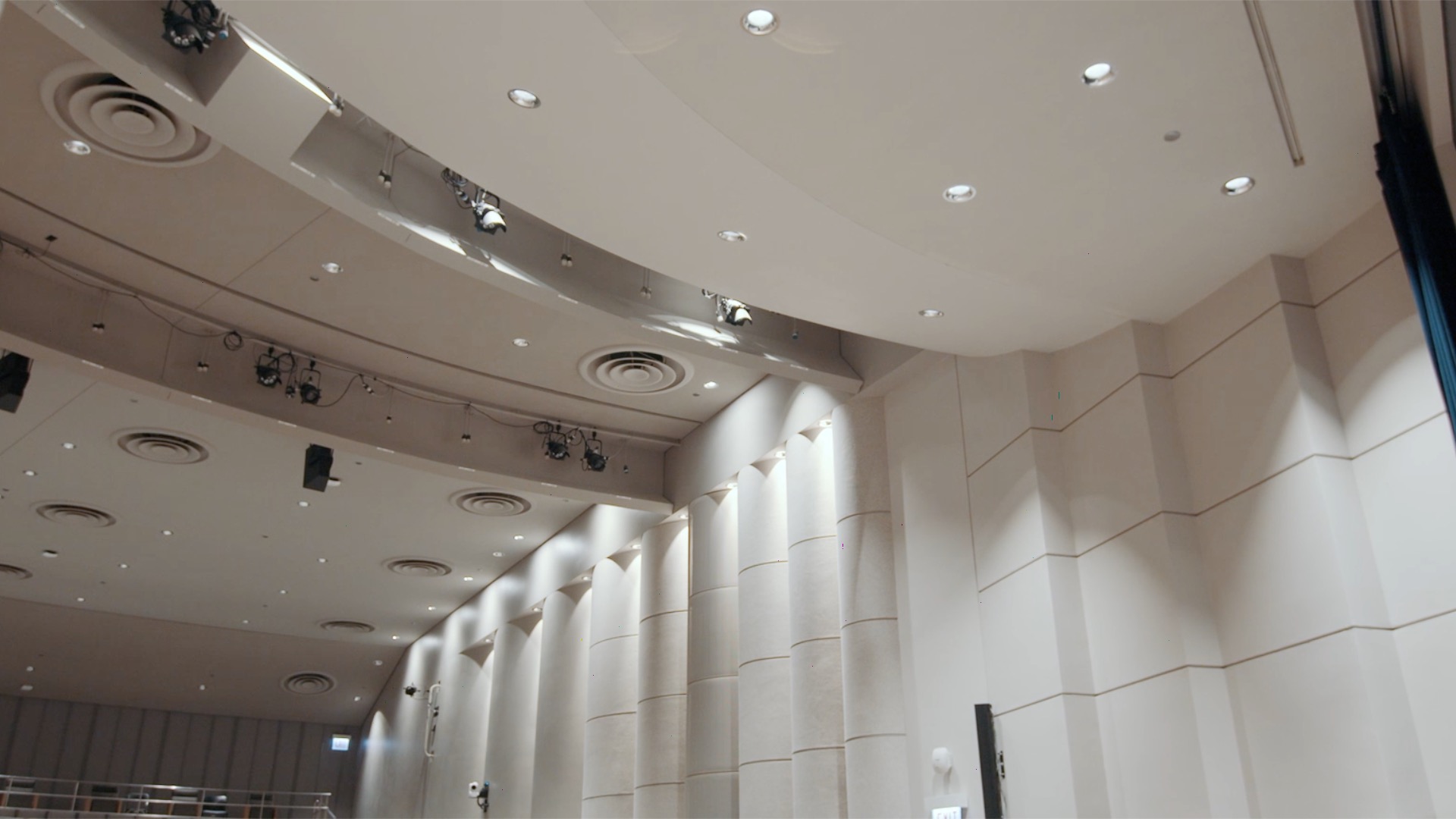 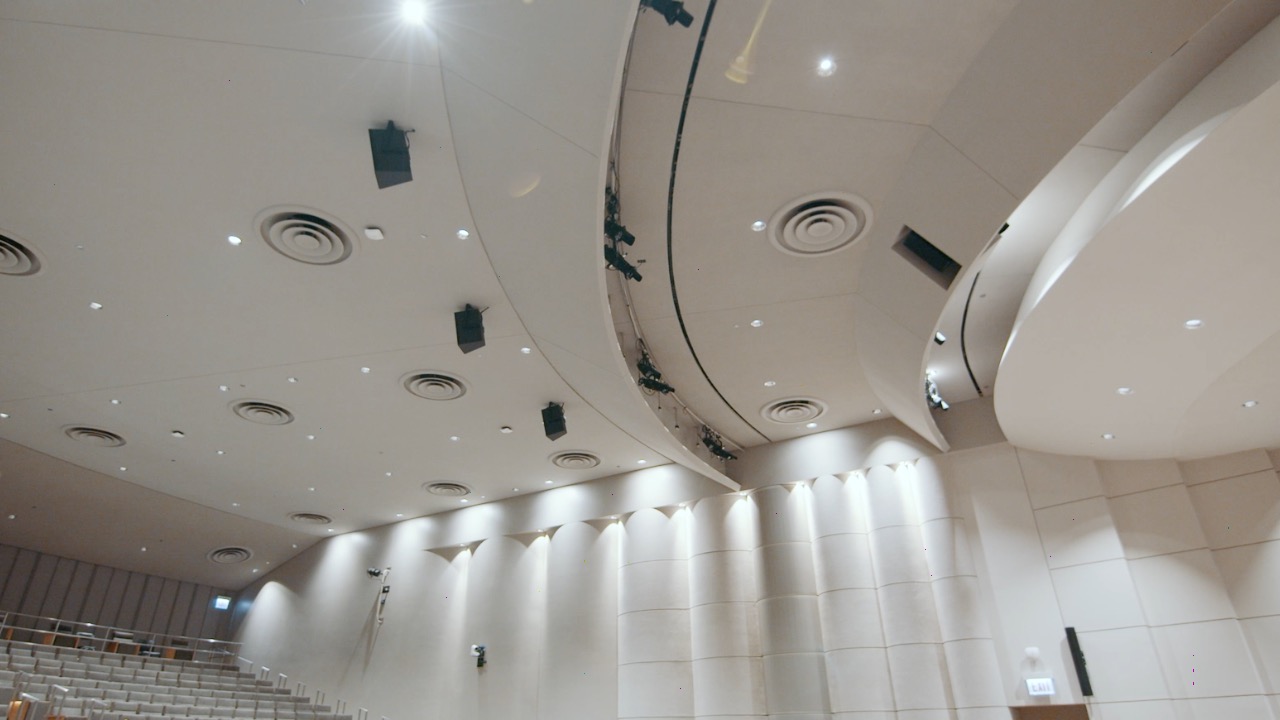 Additionally, by introducing amplified sound into the room, new sound energy was being introduced in places where it previously hadn’t been, interacting with the surrounding design to create echoes and noise in localized areas. Threshold Acoustics explored materials and treatments that could be utilized to control the behavior of amplified sound while also allowing the space to function efficiently as a natural amphitheater as well as a lecture hall with amplified speaker sound.

To create a plan for introducing new materials into the project, Threshold utilized their prior experiences and looked to geometric studies and modeling after gaining an understanding of the space through exact drawings. Current users of the space (the faculty, technical staff, IT staff, and other day-to-day users) were also interviewed to learn firsthand about previous acoustic issues.

Following comprehensive research and modeling Threshold recommended the use of industrial felt in some key reflective areas and the integration of BASWA Phon Sound Absorbing Plaster in the ceiling. BASWA Phon absorbs sound as well as low and high frequencies in a space to reduce reverberation and improve speech intelligibility.

BASWA Phon seamlessly integrates into a surface while giving the appearance of drywall. The BASWA Phon System provides substantial acoustic value (through sound absorption) without being an obvious treatment, making it the ideal integration for maintaining design aesthetics.

By strategically placing BASWA Phon and felt in inconspicuous locations throughout the design, the acoustical consultant was able to control unwanted sound reflections to achieve the project’s acoustic goals.

The Thorne Auditorium re-opened following renovation in January of 2017 and continues to welcome prominent speakers, students and audiences in a space designed to stimulate learning through intentional acoustics.

Thorne Auditorium at the Northwestern Pritzker School of Law