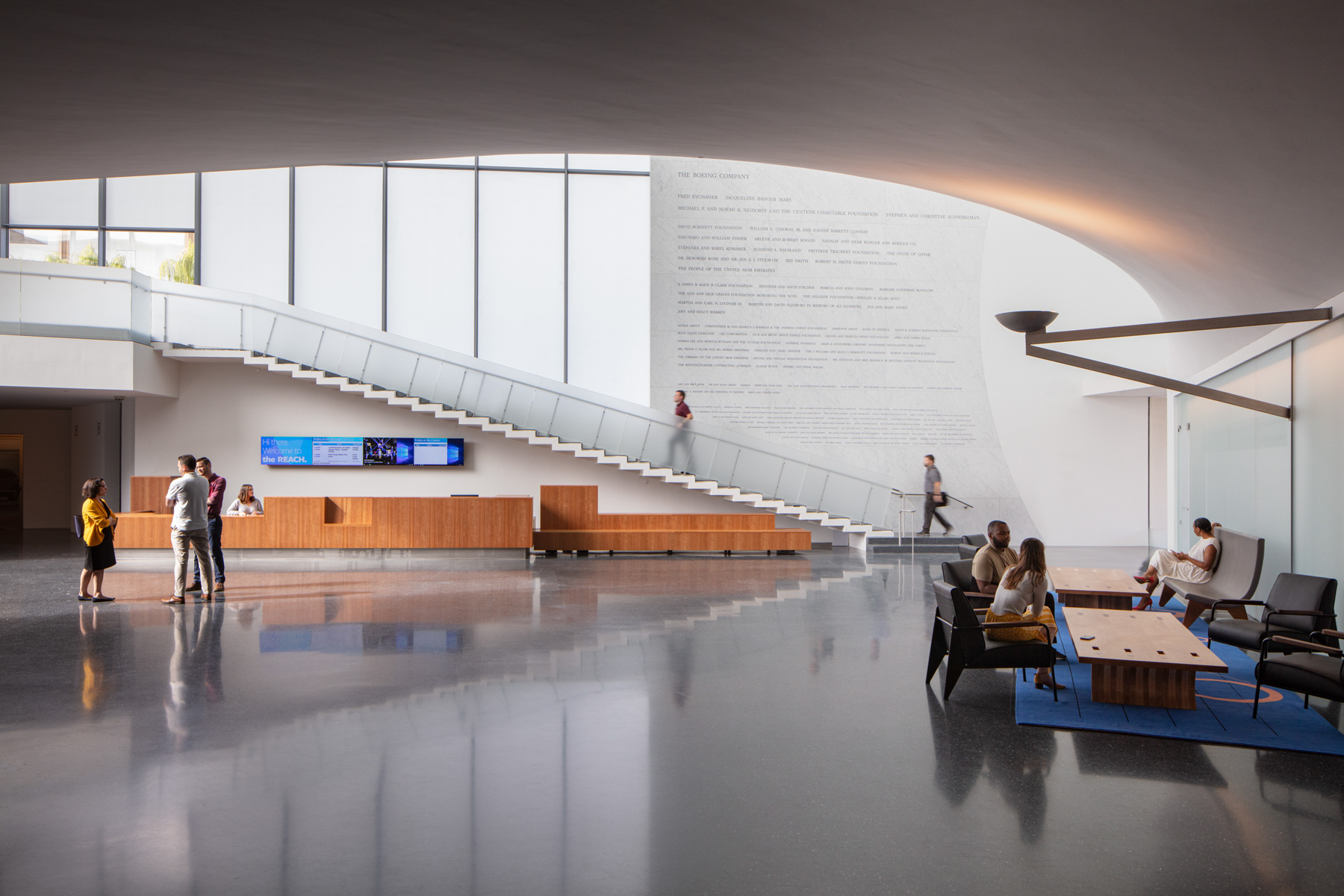 Originally dedicated in 1971, the John F Kennedy Center for Performing Arts was designed by architect Edward Durell to be a “living monument” to President Kennedy’s contributions to the arts. Positioned near the Potomac River amongst the esteemed presidential monuments in Washington D.C. the monument’s vast outdoor green space and stone building facilitate interaction with the arts across a variety of principles. This active space dedicated to connecting the surrounding community with artists and the full spectrum of the creative process, truly embodies its original vision as a living monument to host public events and share stimulating art.

Following more than 6 years of planning, in early 2013 a design was announced to expand the space to add much-needed room for rehearsals, education and additional programming both indoors and to the outdoor green space. The REACH Expansion to Edward Durell’s original stone building roughly doubled the Kennedy Center’s outdoor space making it the largest in D.C. and added 72,000 square feet of interior space across three pavilions.

Nestled beneath the landscape which acts as a green roof, the three subtle pavilions designed as part of the REACH Expansion by Steven Holl Architects are interconnected below the landscape expanding the Kennedy Center’s capacity for stimulating art and programs. The much-needed REACH Expansion has added space to the original design to include 11 “flexible spaces” for various uses, an outdoor stage and a video wall, 4.6 acres of landscaping designed by Hollander Design, and an arts cafe. Below ground the REACH is linked to the main Kennedy Center building and, via a new pedestrian bridge idealized in the original planning of the center, the Potomac riverfront.

In complement to the original design, the three pavilions are fused into the surrounding landscape to maximize green space, give visual access to outdoors, and from the exterior, to frame views to the Washington Monument, Lincoln Memorial, and Potomac riverfront. Each of the titanium white board-formed concrete pavilions are unique in form with curved or flat walls, tilted and straight swooping ceilings and design aspects that exaggerate natural light throughout all of the spaces. 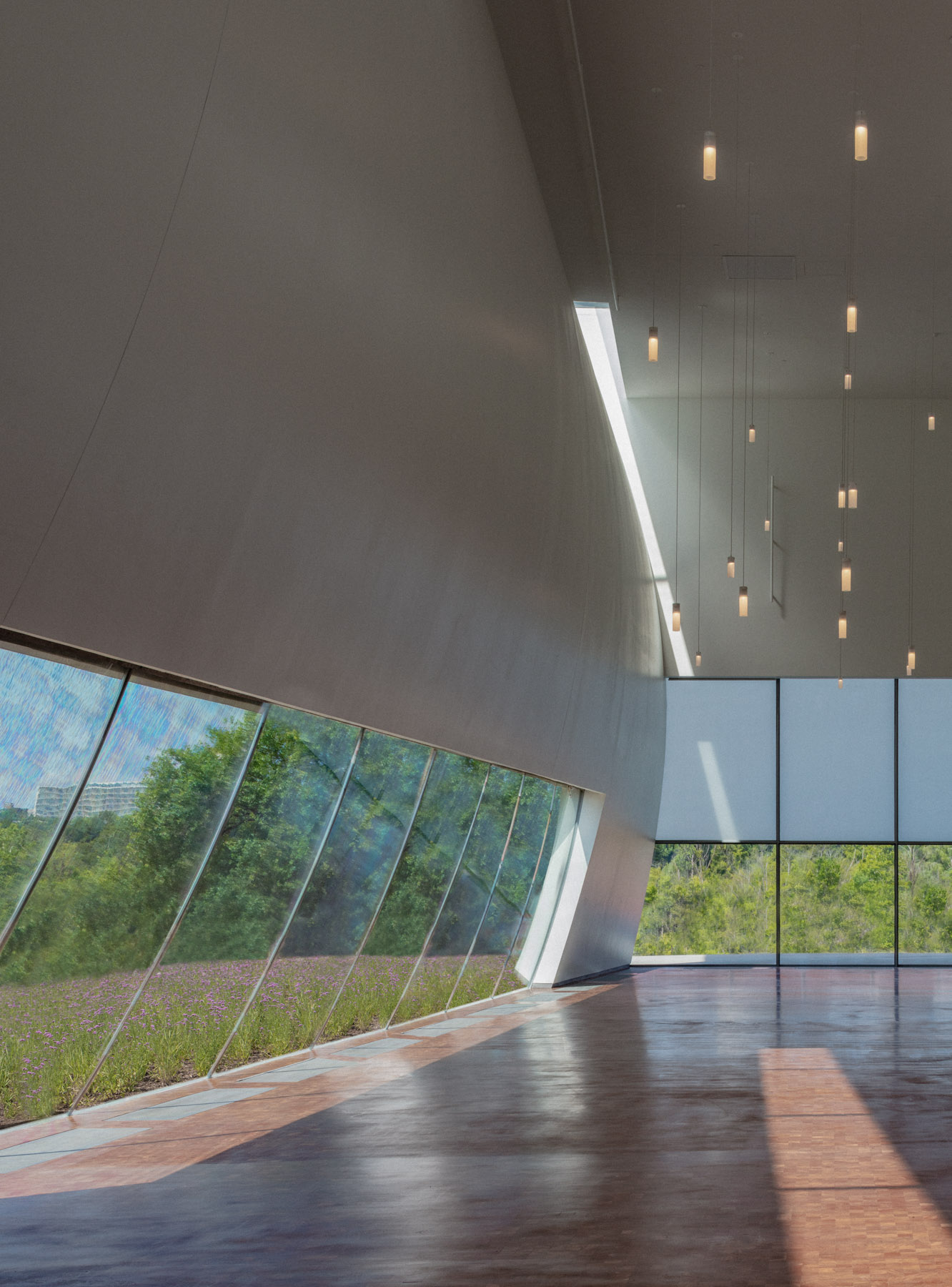 Inside each of the pavilions curved glass windows are positioned to diffuse light through the entire space in the day, while at night light emanates from within the buildings to light the surrounding landscape. Walls within the space are cast-in-place concrete walls, and in some areas a crinkled concrete texture to give consideration to acoustical qualities in theater and rehearsal spaces.

Throughout the design Steven Holl Architects thoughtfully considered the perceived and subconscious impacts acoustics would have on how visitors connected with the space. When situating the pavilions in the exterior landscape careful consideration was made to the placement of the pavilions to ensure that acoustics would be captured within the expanse of the landscape to benefit outdoor activities and programs. In the interior of the spaces, materials such as the concrete walls and vast glass would create a cacophony of distracting echoes if not acoustically treated.

To absorb excessive reverberation caused by the hard geometric lines and materials within the design, BASWA Phon Acoustical Plaster was integrated into the ceilings throughout the three pavilions. BASWA Phon’s monolithic properties allowed for the Steven Holl Architects team to realize their original design intent, while also remaining considerate of the visitor’s acoustic experience. By reducing reverberation in a space, BASWA Phon fine tunes intentional acoustics while positively impacting the wellbeing of those who experience the space by minimizing noise pollution.

With a Light Reflectance Value of 0.91 per the ASTM E 1477‐98 Standard, the use of BASWA Phon throughout the REACH Expansion also contributes to light reflectance further exaggerating the natural light diffused throughout the buildings. The integration of sustainably made BASWA Phon within the design directly benefits acoustics, natural light, and overall occupant wellbeing, all of which helped the final design to achieve LEED Gold Certification.

With the addition of the REACH Expansion to the John F Kennedy Center for Performing Arts, the center has positioned itself as progressive art institute that will continue to contribute to the arts and celebrate President Kennedy’s significant contributions well into the future.