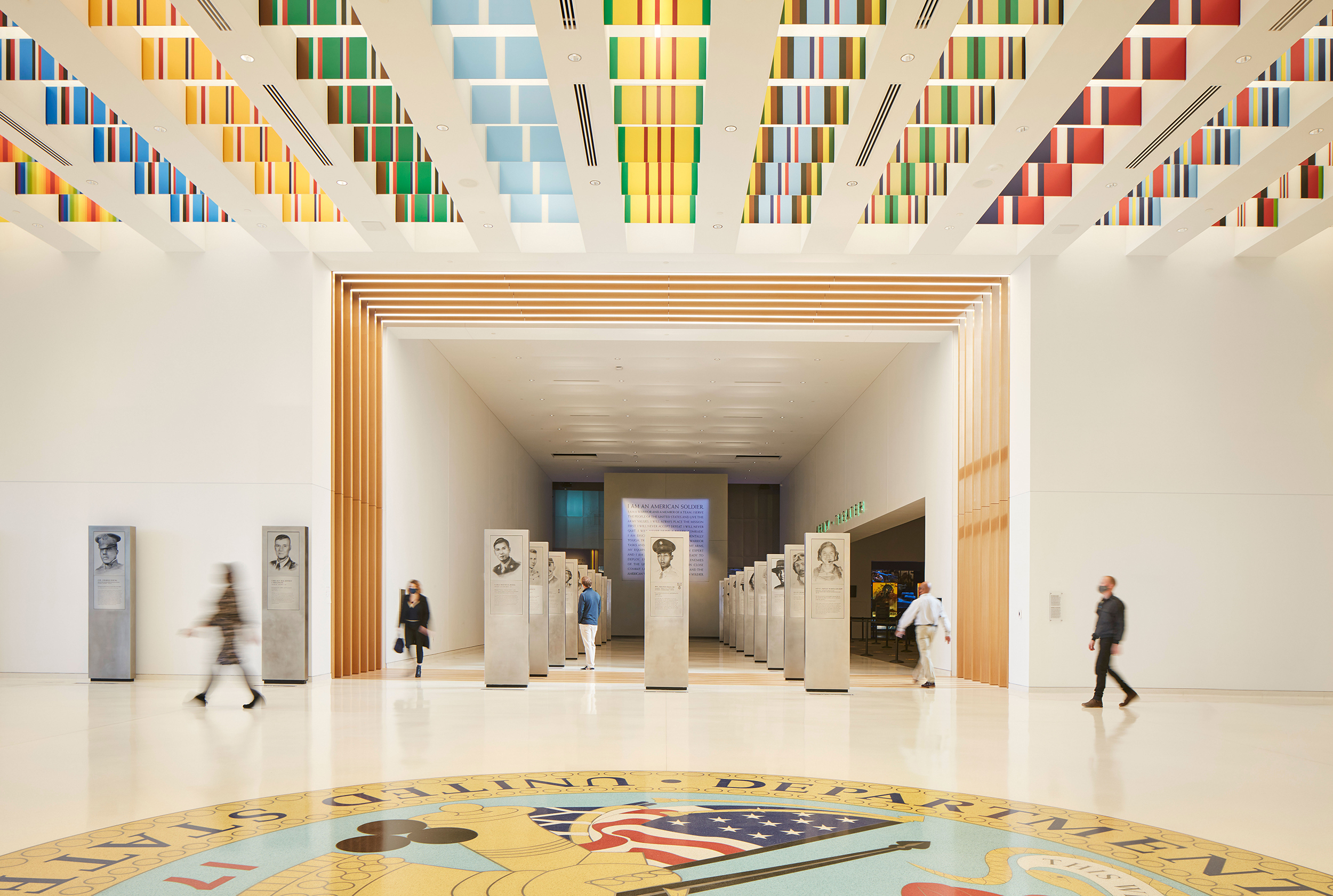 After nearly a decade of planning, the first museum to interpret the history of the United States Army, the nation’s oldest military branch, opened on Veterans Day 2020. Situated on 84 acres at Fort Belvoir, Virginia, just 20 miles south of Washington D.C., the National Museum of the United States Army centers the story of the individual soldier to educate visitors on the Army’s role in life in and war spanning from the Revolutionary War to campaigns still being led today.

Designed by world-renowned architects Skidmore, Owings & Merrill (SOM), the museum’s architecture draws inspiration from the core principles of the Army; discipline, modesty, and rigor. Symbolism connecting the design to these core principles can be seen throughout the 185,000 square foot space.

This symbolic architectural experience begins upon arrival to the museum from the access road, as the simplicity and sharpness of the exterior enclosure composed of panels of stainless steel can be seen monumentally sitting atop a plateau overlooking the meadow and reflecting the surrounding landscape. The facade’s stainless steel cladding establishes the discipline and rigor seen throughout the design symbolic of the Army’s core principles.

The building consists of five pavilions designed to share the history and stories of the over 30 million men and women who have served in the Army since its inception through interactive and more traditional exhibits. Among the various pavilions are also green spaces encouraging reflection, a theater, and ample space for hosting special events and fundraisers. Each pavilion is connected by glass thresholds with sustainability sourced wood fins to signal obvious transitions between spaces and to connect visitors to views of the surrounding landscape.

Upon approaching the museum, a grand lobby is visible through a glazed entrance, and features a coffered ceiling with 22 rows of translucent, laminated glass panels that match the campaign streamers of the historic Army campaigns embarked upon. The stunning lobby is surrounded by retail, a cafe, one of three landscaped terraces, exhibition space, a theater, and a grand staircase connecting guests to more exhibits on the second floor. The third floor features space for special events and the Medal of Honor Garden, a terrace that features a granite wall engraved with the name of every recipient of the Army’s highest decoration. Throughout the design, natural materials including stone floors and American white oak and ash finishes were used.

The museum is certified LEED Silver through a variety of sustainable design strategies, “such as increased insulation, improved glazing, high-efficiency LED lighting, automatic daylighting controls and occupancy sensors, a green roof,” and many other intentional aspects contributing to visitor’s health and experience.

The museum’s disciplined and rigorous design while stunning in it’s simplicity utilized many materials that contributed to the compounding of noise within the building. To help control noise and create a more serene environment, at the suggestion of acoustical consulting firm Akustiks, SOM made the design to incorporate the BASWA Phon seamless, sound absorbing panels and plaster into the design of the lobby. Incorporating BASWA Phon sound absorbing panels into the ceiling, SOM was able to minimize the distracting noise and echoes created by the 100-foot ceiling and stone floor adorning the lobby to improve visitor’s experience without disrupting the design intent.

By reducing reverberation in a space, BASWA Phon fine tunes intentional acoustics while positively impacting the wellbeing of those who experience the space by minimizing noise pollution.

With a Light Reflectance Value of 0.91 per the ASTM E 1477‐98 Standard, the use of BASWA Phon throughout the lobby also contributes to light reflectance further exaggerating the natural light diffused throughout the entrance. The integration of sustainably made BASWA Phon within the design directly benefits acoustics, natural light, and overall occupant wellbeing, all of which helped the final design to achieve LEED Silver Certification.

While the museum officially opened its doors Veterans Day of 2020, considerate of the COVID-19 pandemic the museum is not yet open to the public. However, you can get a virtual sneak peak prior to its public opening by attending one of the many virtual programming events the museum is sharing until safely opening.